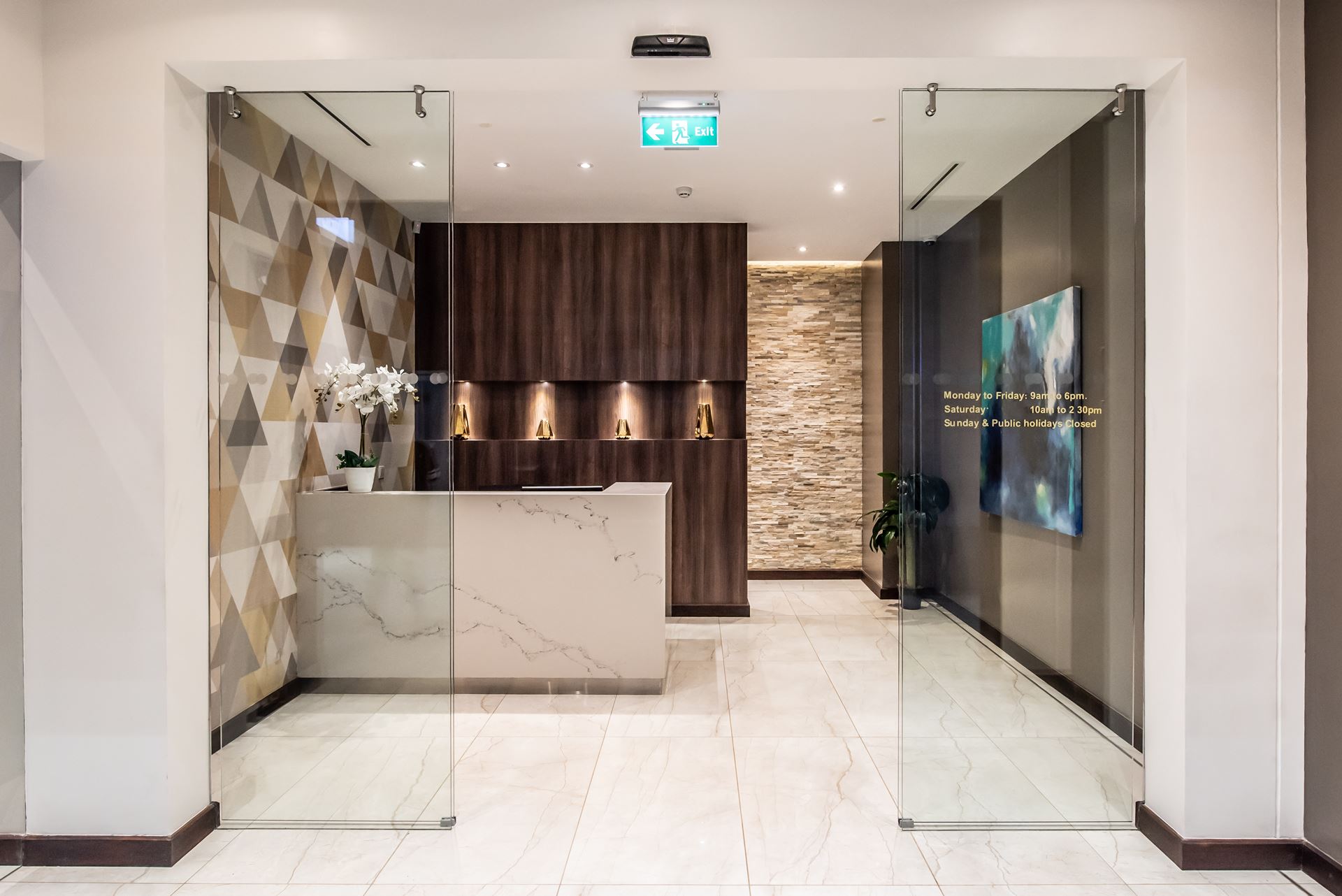 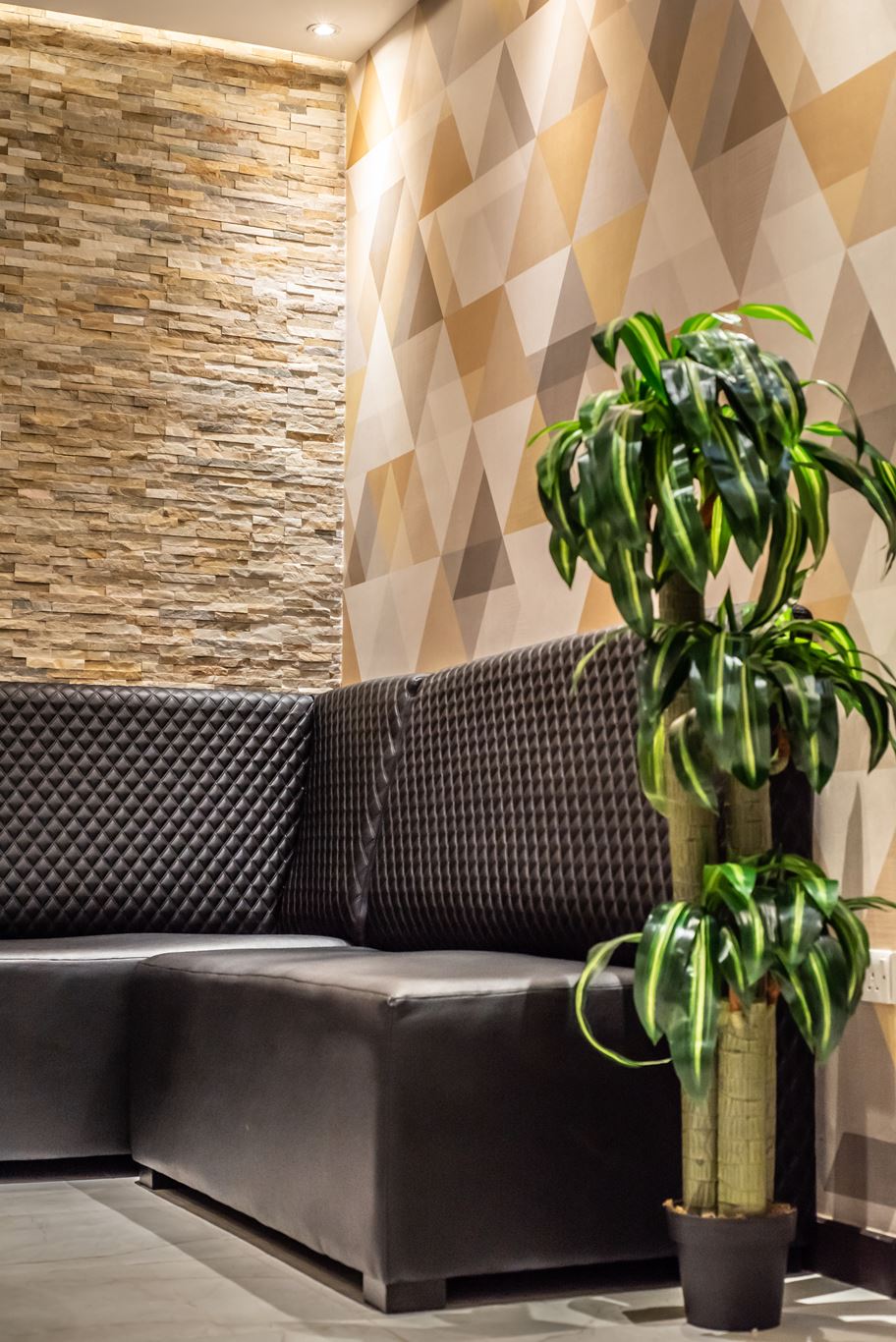 The scope was to design a bank branch outlet geared towards their premium clients. Incorporating their brand aesthetics through the selection of materials and finishes, as well as giving a subtle nod towards their Kenyan roots. This was accomplished by accenting walls with dramatic artwork from local artists (enhanced against dark walls); using bold African-inspired prints on wood and leather arm chairs; and featuring wallpaper and fabrics mimicking the banks triangular logo.
The biggest challenge faced was how to create an exclusive experience for the bank patrons in one of the busiest parts of the mall. And so we took advantage of the high traffic area by branding their largest wall while concealing the entrance reception.
The entrance was designed similar to a lounge lobby, where you are ‘checked-in’ at the reception desk and then proceed through hidden access-controlled doors into the main banking hall. With polished marble-effect floor tiles, plush carpet meeting rooms, piped music in the background and a self-service coffee station the main banking hall feels private and exclusive. A space that reinforces the bank’s promise to their patrons that they are there to serve and assist in their wealth management.

I&M Bank was founded in 1974 as a financial services company and later converted to a commercial bank.

I&M Bank is a wholly owned subsidiary of I&M Holdings PLC, a publicly quoted company at the Nairobi Securities Exchange (NSE). The bank possesses a rich heritage in banking. Started in 1974, it evolved from a community financial institution to a publicly listed major regional commercial bank offering a full range of corporate and retail banking services.

From June 2013, I&M Bank shares are publicly traded in the Nairobi Stock Exchange through the acquisition of its entire shareholding by I&M Holdings Ltd, a publicly listed company.

I&M Bank is a dominant player in the Kenyan market that has been consistently growing, and is innovative in terms of the type and range of products and services it offers.

I&M Bank Limited is also the flagship company of the I&M Group of Companies a leading corporate group in East Africa. The Group has a major presence in Banking and Insurance, Manufacturing and Real Estate. Apart from the Bank, the Group’s related companies include GA Insurance Company – popularly known as GA. GA is one of the oldest insurance companies operating in Kenya specializing in all classes of general insurance. Having its parentage from General Accident UK, it was incorporated as Kenyan Insurance Company in 1979. Enjoying its presence over 50 years, GA has earned its standing as one of the reputable insurance companies in Kenya.

I&M Bank also owns 50% of a bank in Mauritius – Bank One Limited an acquisition made jointly with the CIEL group of Mauritius, which is one of the largest and most reputable business groups in Mauritius. Bank One, with its customer base of over 50,000, a branch network of 15 branches in Mauritius, and a staff complement of 300 is a fast growing commercial bank in Mauritius. 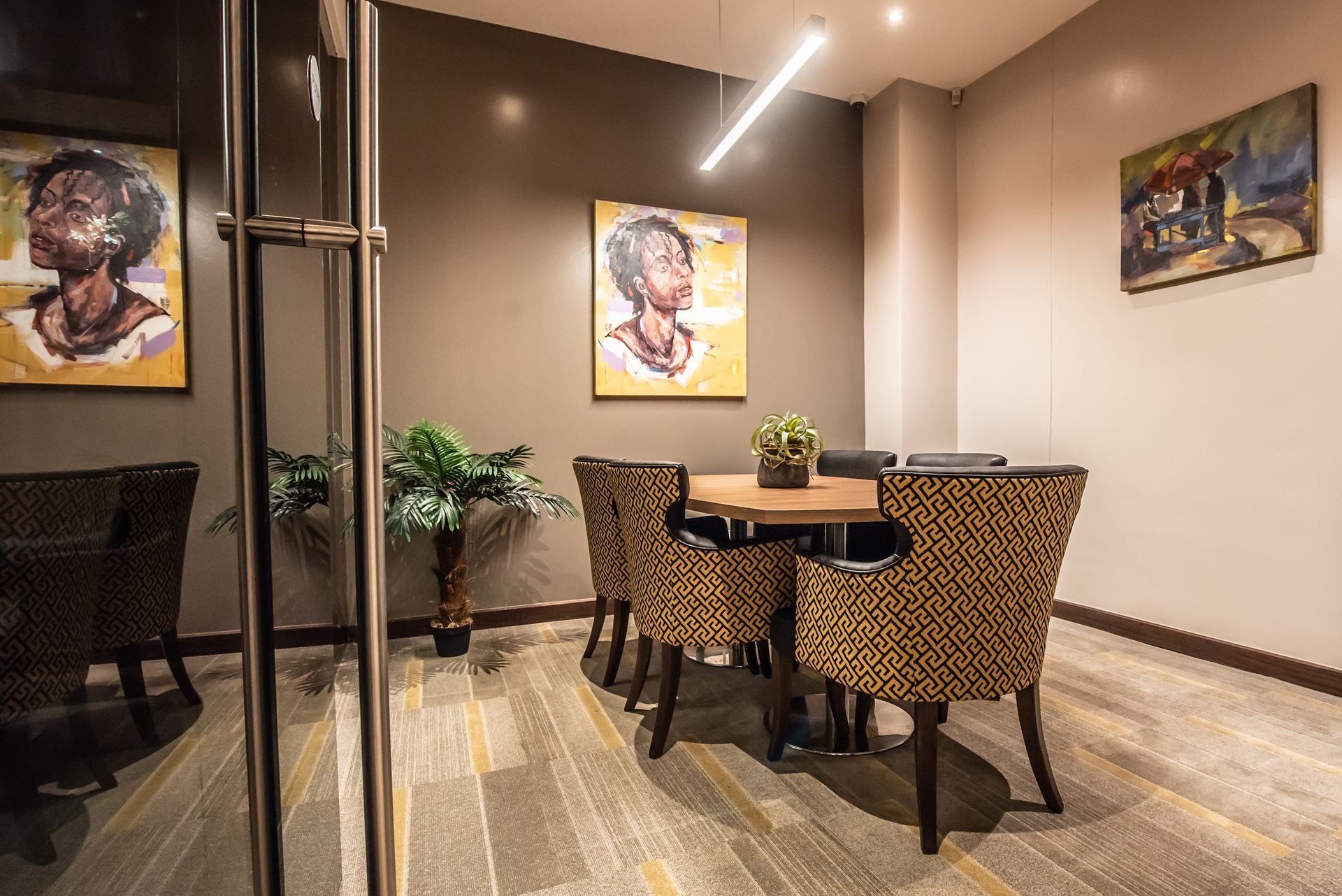